Ice Queens – Introducing Bota Bota – La Relève 2/2 | Bota Bota, spa-sur-l'eau
We use cookies to offer you content, publicities and services tailored to your interests and to compile visit statistics. By continuing to use this website, you agree to our use of cookies unless you have disabled them through your browser. For more information, please see the Terms and Conditions.
I accept 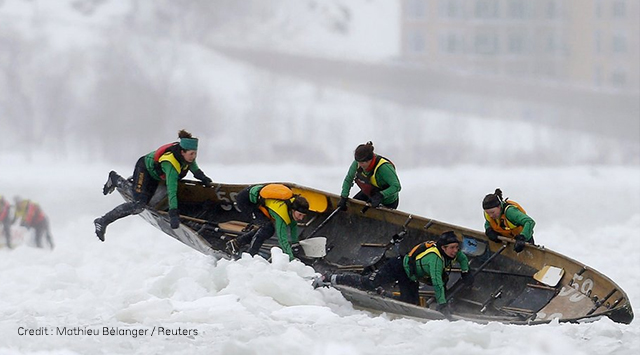 On February 21, the Bota Bota La Relève team will get out there to win the Montreal Ice Canoe Challenge and outperform other teams in the women’s Élite Class. The first part of this article introduced us to our team members and their exciting sport. Here are more thrilling accounts!

Teasing the coxswain is a tradition in ice canoeing. That’s because the coxswain takes less of a risk when it comes to running over the ice, given that she’s last in line during transitions. She can avoid weak ice where her team-mates have already fallen through. The team captain, at the front of the line, has to show a little more nerve, since she has to test the strength of the ice. She gets to fall through to the waist a lot more often. But this is all part of the game, and after one dunk, you get used to it and take it all in stride. Our sponsor might have something to say about the benefits of an ice bath!

Sometimes the coxswain gets thrown out of the canoe without her team-mates noticing. It can be slightly unnerving to see the canoe moving away and your cries for help going unheard because of the noisy ice scraping against the hull. And then there’s the ice that slowly begins to sink into the river under your feet. Not very reassuring. But your presence is eventually missed, and you’re quickly brought back on board.

When not on the ice, team members often reminisce about those past races that got the adrenalin flowing. But when we’re inside the canoe or running beside it, we tend to forget about the unique character of our sport. Only when we’re far from the ice can we really appreciate how exceptional ice canoeing really is. And that’s when the stories come out, stories that tend to become the stuff of legend over time. A “team history” is slowly created in this way, one made up of stories involving memorable races where all the other teams get carried off by the current, of sessions that last four hours instead of one, of equipment that breaks during an important race, or of superhuman performances from team-mates that make for triumphant wins. And let’s not forget the stories about taking our canoe on the ferry, or the times we successfully crossed the river when the ferry was stuck in the ice!

WAXING THE CANOE
by Anne-Sophie Corriveau

When we first waxed the canoe three years ago, the stress was pretty intense. Would the canoe slide or stick? Would the wax hold until the end of the race? Were there enough coats?

Ah! The joys of waxing!

Waxing the canoe’s hull is just as important as waxing cross-country skis. As in skiing, several types of wax are used, depending on the temperature and on the presence of water. Using the wrong type of wax can make the canoe sticky and slow us down. As the saying goes, a good waxing won’t make you win, but a bad waxing will make you lose.

Just before our first race, we were very happy to get the advice of other canoeists on the choice of wax. A team member from the men’s Élite Class even invited us to attend a waxing session so he could explain the different techniques. This kind of mentoring is essential in ice canoeing, as it’s the only way to ensure the dissemination of knowledge and the creation of new teams. Everything we know about waxing we learned thanks to mentoring.

Now we’re experimenting on our own and learning every time we go out on the ice. We even keep a “waxing journal” in which we note snow conditions, temperature, the wax used, and our impressions of the experience. We consult the journal before every waxing to help us choose the best wax for the prevalent conditions. Our technique is now quite reliable.

The Bota Bota La Relève team has five founding members. Bringing everyone together was quite a feat. What we’ve accomplished so far has made us stronger and more united. There’s now a real sense of belonging and a team spirit that drives us to win.

Even after three years, the team still considers itself as an up-and-comer in the sport. We still have a lot to learn. All having a similar level of expertise, we easily learn together and use our knowledge to take the team further. Now we can invite new recruits to the team and share this acquired knowledge.

Our team is unique in its attitude to leadership. Where decisions are taken by the captain or coxswain on most other teams, our team takes pride in encouraging all members to play a leadership role. I think this contributes to our having a common vision, and makes everyone feel they’re an integral part of our shared successes.

But this philosophy does have its drawbacks! It means everyone has to agree, even when there’s little time for discussion. Luckily, we’ve known each other for a long time, and have played other sports together. So we’ve become fast friends and now share a common attitude to teamwork and a common vision of what ice canoeing should be.

THE FUTURE OF ICE CANOEING
by Dominique Laliberté

The future of ice canoeing looks promising! More and more teams register each year for the Canadian circuit, tourists now have the opportunity to try out ice canoeing on the river thanks to a private initiative, and two new races have recently been added to the circuit. Clearly, the sport is growing in popularity, especially in Quebec.

In the next few years we’re hoping that other teams will join us in the adventure and take advantage of our great river. It might be interesting for people to be able to try out the sport without having to enter a competition. Who knows? In ten years, ice canoeing may become the new cross-country skiing!