Bota Bota, 3 lives, 3 adventures | Bota Bota, spa-sur-l'eau
We use cookies to offer you content, publicities and services tailored to your interests and to compile visit statistics. By continuing to use this website, you agree to our use of cookies unless you have disabled them through your browser. For more information, please see the Terms and Conditions.
I accept 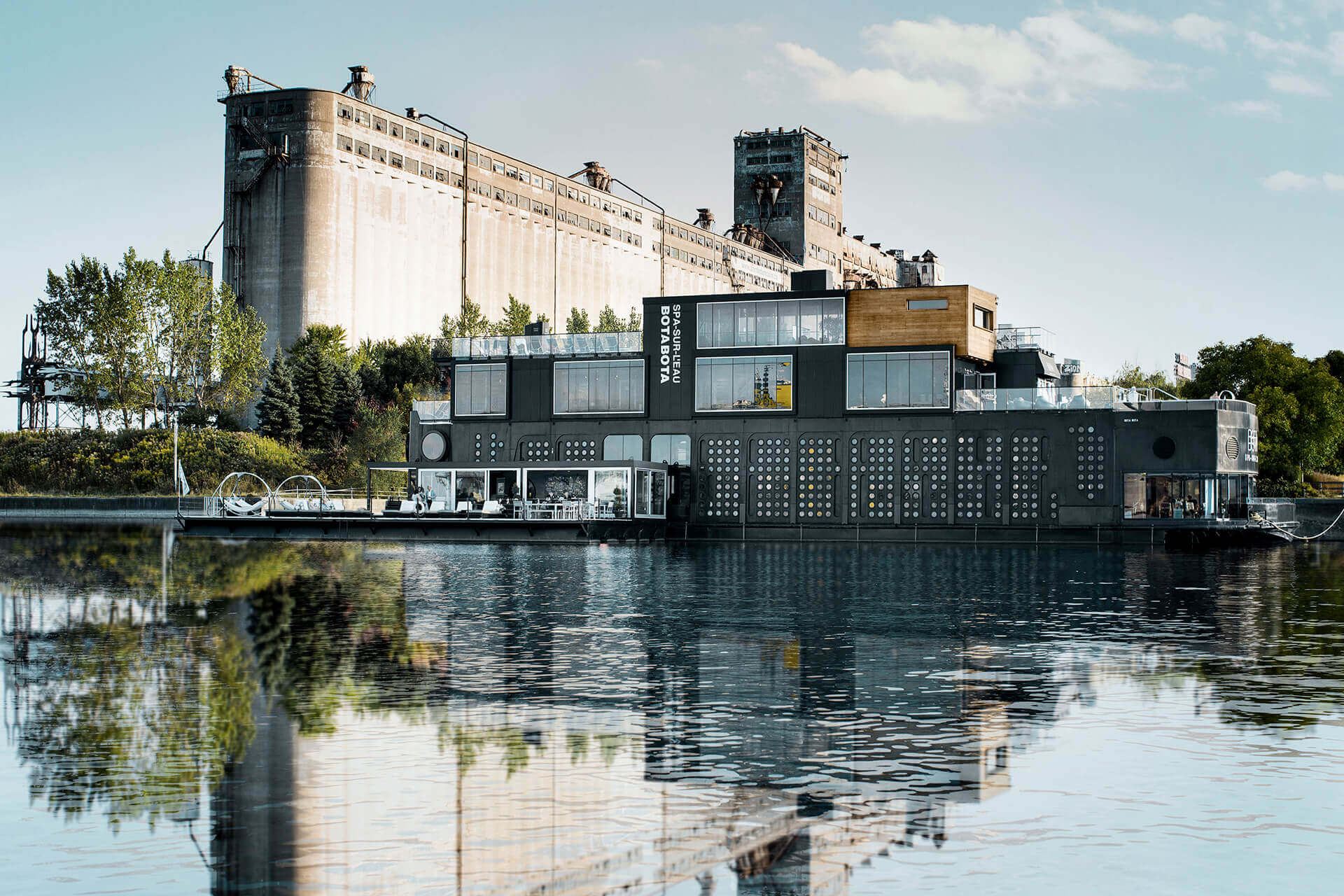 Moored at the Old Port, the Bota Bota spa-sur-l’eau as you know it today has a story full of twists and turns. I spoke to Natalie Emond, Customer Experience Manager, daughter of Daniel Emond and sister of Geneviève Emond, Executive Director, about this child they all have in common. With a broad smile, she remembers the beginnings of this wonderful journey.

The idea of ​​a floating spa did not come right away. As a lover of spas, the Emond family was looking to create one on a waterfront property with quick access to public transportation. “It was somewhat of a utopia,” admits Natalie, amused.

Water and well-being are an integral part of the family DNA, their father already attending spas over 30 years ago. “In our cottage, we have a small sauna overlooking the lake,” a nod to the sauna-on-the-water which can be found on one of the facades of Bota Bota, directly overlooking Habitat 67.

Water is also an inseparable part of a spa. “It’s a term that’s a little overused nowadays, but for us the proximity to water was very important because it’s part of the experience. ” It is no coincidence that the first activity offered on board is called the water circuit, which consists of three distinct stages, closely related to water: hot, cold, relaxation.

From one life to another

When the boat is purchased in 2008, it is recovering from a busy past.
Used as a ferry in its early hours, he ensures the shuttle from Sorel to Berthier from the 1950’s to 1960’s before being turned into a theater-boat, also known as L’Escale. Embellished by a large central staircase, which no longer exists, it sailed on the Ottawa River before being docked in Saint-Marc-sur-Richelieu.

It is at that point that the Emond family acquired it, before starting the initial renovations. “It was in dry dock at Sorel for a year and a half. Some remodeling had to be done to make it wider and more stable by filling the edges with concrete. ” A project of this size was a great test, for the family as well as for the naval and building architects. “It was an innovative project in the world of construction, which, to our knowledge, had never been done before. Water is very heavy – you have to make sure everything is stable.”

Towing in August 2010 to Montreal is a memorable experience. “We had to wait for the river level to drop a bit. The structure was getting higher, a big wooden structure, and we had to make sure that everything could fit below the bridges.” Its engine already removed, the boat with its impressive skeleton was no longer made to navigate.

The boat’s new identity was built little by little, thanks to the agency Sid Lee, present from the beginning. “We were their flagship project at the time, their first architectural project, which incorporated everything that was brand image. It helped with spreading the word internationally. We were not worried for the future. “

The name Bota Bota was an obvious choice. “When we heard Bota Bota we looked at each other, our eyes wide, and we said to ourselves: “Well here it is, that’s it!” It means drop by drop in Japanese.” Beyond its meaning, it is also a pleasant name to pronounce, its “O”’s a reminder of the portholes which can be found on the boat.

On December 10th, 2010, Bota Bota officially opened its doors. “The first week we mostly welcomed family members and friends, we had to stick together.” Excitement could be felt in the air at the reception of each new client.

In the months and years following the opening, beautiful steps were achieved.
From the winning a Cannes Golden Lion in 2011 to welcoming the 250,000th visitor in 2015, Bota Bota’s reputation shines thanks to the excellence of its services.

In order to improve the quality of its offer and services, the spa-sur-l’eau is regularly equipped with new facilities.
In October of 2013, the restaurant on board is inaugurated. Much smaller than it is now, it will undergo several changes thereafter in order to adapt to the demand.

In May of 2015, the gardens are born and offer visitors a brand-new relaxation area. This time on earth, it gives them the same opportunity for a relaxing journey, with a view of the boat.
The floating sauna, the youngest member of the family, was born in 2017. Still little known to visitors, but a favorite of employees, it represents a unique haven of peace, directly on the water.

Today still one of its kind, Bota Bota welcomes new customers relaxation adepts daily on board. Traveling is still relevant, but this time, without leaving the port. The quest for relaxation is done through the body and mind.
“In the first year, every second call asked us what time the boat was leaving.” Recalls Natalie in a laugh. Her eyes sparkle for a moment in silence, their blue overflowing with an ocean of memories.