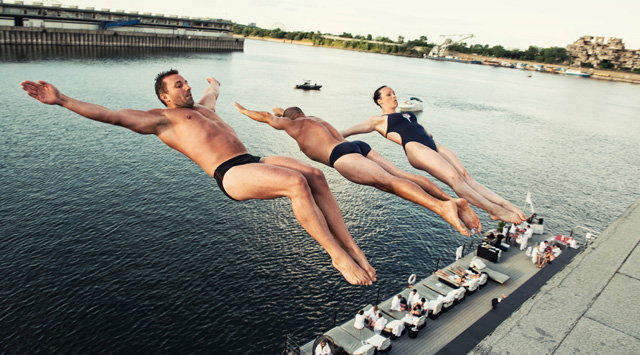 Montreal’s very beginnings are inextricably tied to the mighty Saint-Laurent River, a wide and accessible passageway inland from the Atlantic Ocean, carrying people, natural resources, and much more. Montreal’s main ports became increasingly industrialized over hundreds of years, putting the city on the global map, yet, as seen in almost all port cities, polluting the waterway in the process. The new millennium, however, has brought numerous changes to Montreal’s river ports, including de-industrialization, clean-up efforts, and significant improvements in water quality.

Even with these changes, Montreal remains one of the country’s main import-export hubs by sea, land, and air, with regulations at the federal level going hand-in-hand with industry compliance to reduce pollution. Interestingly, shipping by boat has been found to be one of the cleaner transportation methods, whereas air transport has been shown to be up to 90% more polluting when it comes to greenhouse gas emissions. According to the Natural Resources Defense Council, “every ton moved by plane instead of ship adds over 4.5 times more particulate matter and nearly 25 times more nitrous oxides to local environments.”

Vessel type, fuel efficiency, and fuel choice also have an effect on lowering boat emissions – a change that has also contributed to Montreal’s port waters becoming cleaner and safer over the past decade. While traditional shipping freighters still rule the seas, the introduction of wind-powered sailing freight vessels, such as those used by European-owned TransOceanic Wind Transport, signals another shift to low-pollutant energy.

As urban rivers have become less polluted, interest in using the waters for recreational purposes, from beachfronts to fishing grounds, has grown. Groups and organizations such as the Old Port of Montreal and the Montréal Baignade Comité Citoyen have been among the first to take advantage of the cleaner waters. In July of 2014 the Baignade Comité Citoyen held its inaugural Grand Splash swimming event off the Old Port’s docks, and for the past two winters Pêche Blanche Vieux-Montréal, seeing that fish stocks were naturally increasing, has constructed Village Pêche sur la Glace for ice fishing in the waters off the Quai de l’Horloge. Bota Bota also provides an access to the river to passengers for a refreshing dip and organizes occasional activities such as high diving demonstrations or paddle board events. With government, citizen, and commercial groups now giving more attention to the health of the Saint-Laurent River, such recreational initiatives are only bound to grow.