Portrait: Olivier Rielland Nadeau, at the heart of the concept | Bota Bota, spa-sur-l'eau
We use cookies to offer you content, publicities and services tailored to your interests and to compile visit statistics. By continuing to use this website, you agree to our use of cookies unless you have disabled them through your browser. For more information, please see the Terms and Conditions.
I accept

Portrait: Olivier Rielland Nadeau, at the heart of the concept 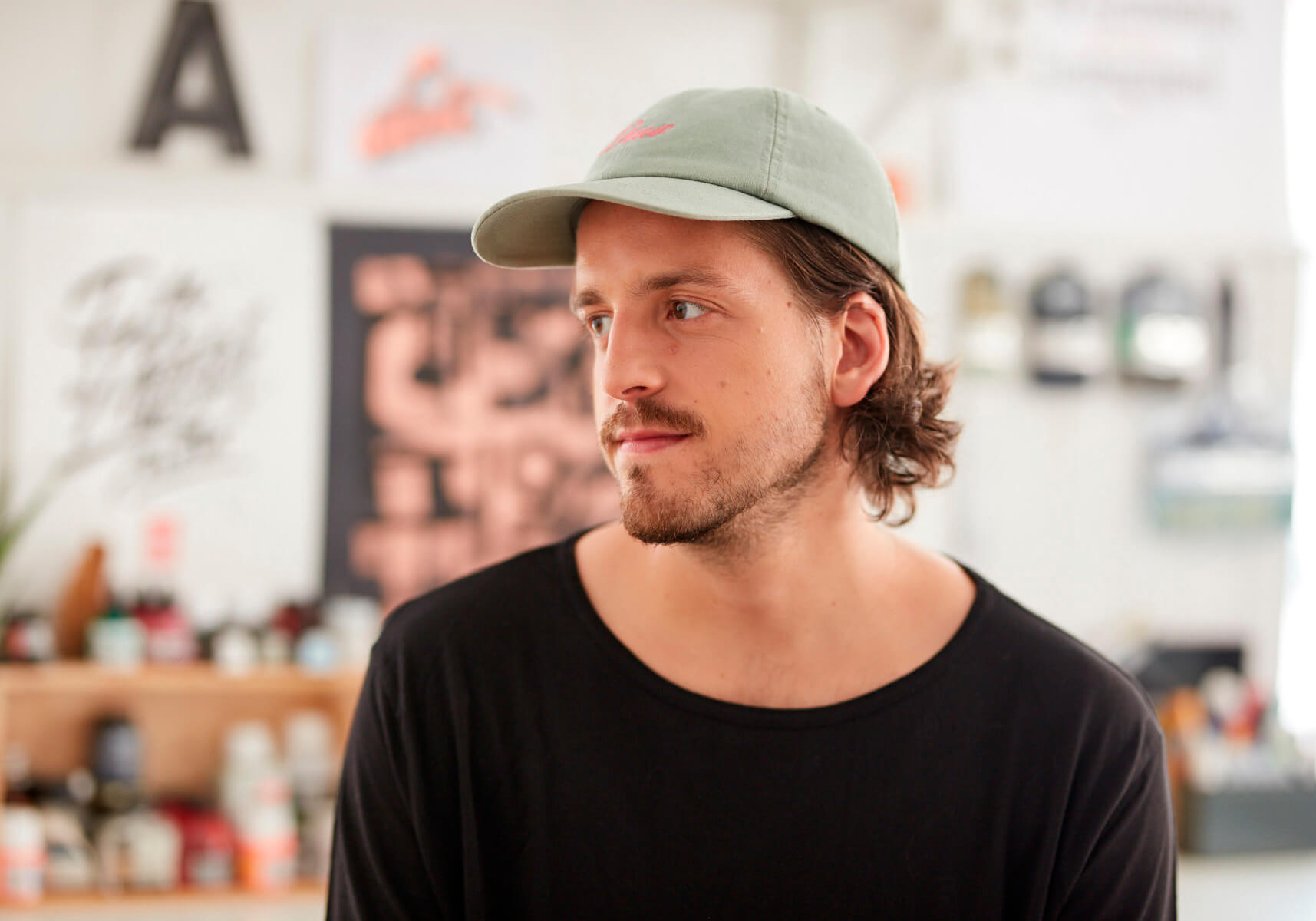 Olivier Rielland Nadeau, co-creative director at the Dada agency, played a significant role behind Bota Bota’s new visual campaign. As the creator of the concept, his work asks us to reflect on the idea of ​​drifting into a new perspective, a way of approaching relaxation differently.

Originally from the West Island of Montreal, Olivier was born to a Parisian-Basque mother and a Quebec father. “I had semi-troubled teenage years, I had an artistic personality, but I struggled at school, I spent my time drawing…” In middle school, he crossed paths with a person who introduced him to graffiti, “this amazing world saved my life”.

He ended up changing schools, but his knowledge of art offered him the opportunity to integrate and be appreciated by all. “Punk rockers, skateboarders, rappers, everyone wanted me to tag their pencil cases, so I survived high school with that skill. I was everyone’s friend,” he recalls with a smile.

A few years later, he joined a Cegep in Human Sciences, of which he has questionable memories, “I didn’t go to my classes a lot at that time, it was total freedom. We were starting to own cars… it’s not my proudest moment.”

He headed for graphic design at Marie-Victorin, encouraged by his parents, who were happy to see their son fall in love with this field. “I have very passionate parents who did what they loved and followed their passion. They never expected me to go into a financial, political, journalistic or engineering path like many of my friends. They always let me do what I wanted.”

Upon leaving his technique at Cegep, Olivier landed his first job. A very important step in his professional development. “I made the decision not to go to university to do a bachelor’s degree, but instead bet on a graphic design work experience”, a choice which soon proved to be very positive, bearing the fruits of his labour quickly.

From a printing agency to a downtown start-up, Olivier’s world transformed to the sound and rhythm of his pens and keyboard shortcuts. These few years are an infinite well of encounters, learning and gained knowledge, “I learned to be a machine, it was very dynamic and fun”.

The art of words

One day, a friend of his showed him his calligraphic prowess on a piece of paper. He drew the outlines of a Gothic writing and Olivier remained speechless, “My brain exploded. Going back to the construction of the letter, to its roots… doing it freehand is so cool”. They found themselves, accompanied by a third friend, taking calligraphy lessons at the Lionel Groulx community cultural center. “It was every Monday with a much older crowd,” he recalls with a hint of humor in his voice, “they brought us sweets, it forced us to disconnect from our screens for a little while.”

This is how Montreal’s trash began to get a makeover. “After class on the weekend, we practiced on trash cans, making them talk by writing on them.” They quickly made up a group name: Garbage Beauty. As an unexpected boy band, Olivier, Romain, Vincent and Etienne formed a creative unit full of poetry.

July 1st quickly became Garbage Beauty Day. While moving day was in full swing, the three men went on a hunt in search of treasures to which they would give a voice. It is also on this precise date that they met Émilie Boisvin, a journalist at the time at Le Devoir. They graced a full page of the newspaper under the prestigious title of “Men of Letters”. Interviews, contracts, activations followed, for C2 Montreal, the Museum of Contemporary Art to only name a few. “Those were really fun glorious years, just when calligraphy was starting to come into its own.”

Then, 4 years ago, the boy band saw the curtain come down for the last time. The group separated; a moment Olivier recalls with sadness. But this path strewn with chance encounters enabled him to meet Andréanne Poitras, now Vice-President and Associate of Dada.

Along the way, she offered Oliver the opportunity to join the Dada agency, while the pandemic was raging. A freelancer for a few years, Olivier lost his contracts and embarked on this new journey, filled with doubts. “I asked myself a lot of existential questions, but I told myself that I was going to give it my 500%. Be the change you want to see, as they say!”

Drift into a new perspective

“I wanted to shoot photography– it was the only thing I knew I wanted us to do,” Olivier explains about the new campaign, “I wanted it to be something artistic.”

While the concept of this new campaign was making its way to Oliver, the pandemic was still in full swing, “We were stuck in our homes, in our bubbles.” Olivier recalls his positive and negative mental loops, “As for most people, for me it was very up and down, very weird, very inconsistent. I tried to imagine myself at Bota Bota by asking myself how I would feel if I was at the spa right now, what would it allow me to do.” He began to look into the concept of letting go, “We saw life in a certain way because of the pandemic… it was a way of seeing things from a new angle, of opening up to other possibilities… In the end, the spa was a way to take a step back, a change of perspective.”

The key word thus became perspective and helped feed Olivier’s very active imagination. “While researching, I found images of forced perspective, of people putting themselves in anti-gravitational positions.” Added to this were the iconic details that make the boat what it is; its unique environment, the city, its architecture…

“We had a fun playground!”, he underlines. “James Stapleton, our photographer, was a creative partner who was able to get us where we wanted to go.” Following this concept undermined by unknown paths was not an easy task. “We managed to do something that wasn’t simple. It was a difficult vision to portray and absorb, you really had to believe in it. We were constantly second guessing ourselves.”

In hindsight. Olivier has fond memories of this new campaign. “We did a lot with the resources we had. I can’t wait to see it deployed. It’s fun when everyone is happy. There are challenges but we collaborate, which is really cool. We took it upon ourselves, it’s not just a question of doing your job, and not all of our clients inspire that kind of willingness.”

To find out more and see the different versions of the campaign, click here.