In Defense of a Less Performative Pride | Bota Bota, spa-sur-l'eau
We use cookies to offer you content, publicities and services tailored to your interests and to compile visit statistics. By continuing to use this website, you agree to our use of cookies unless you have disabled them through your browser. For more information, please see the Terms and Conditions.
I accept

In Defense of a Less Performative Pride

I have sometimes wondered why I decided to go into marketing. I’ve always found it difficult to invest myself body and soul in spreading a message if I don’t believe in it. As years went by, I chose to put authenticity at the centre of my work, and I thrive when I feel that my message is truly based on the values of the company I’m representing.

So, every June, I don’t know what to think about Pride Month. The sudden overuse of rainbow flags by large, often problematic corporations fuels my cynicism, even though I’m usually a glass half-full kind of girl.

I joined the Bota Bota crew about a year ago. In the past, I wouldn’t have been comfortable speaking out about this, but I now have enough perspective to reflect on what makes this company so different, and how much I’ve been able to blossom in my identity.

On the Uniqueness of Each Experience

As a member of the LGBTQ+ community, I am definitely a late bloomer. In high school, when hormones are usually in turmoil, I had a very detached attitude regarding my friends’ love drama, even going so far as to judge the crying session they would sometimes hold in various high school bathrooms. As far back as I can remember. I’ve always been an observer of my peers’ emotions rather than fully experiencing my own. A shrink might go so far as to diagnose this as a defense mechanism.

So, I went through high school without ever falling madly in love and the two romantic relationships that afterwards marked my life bloomed from friendship. A friendship of a few months in one case and 11 years in the other (as I said, late bloomer). It was sort of a coincidence that the first relationship was with a man and the second – which is going on 15 years – with a woman.

I had the incredible luck of growing up in an open-minded environment, of never having been bullied as a teenager, and of having seen several classmates come out. Furthermore, I had the great advantage of not really questioning my orientation while I was growing up, so my motto was already “Go with the flow” when I fell in love with my girlfriend. I ended up coming out very quickly and it all went relatively smoothly.

However, I know that my situation is unfortunately not that of most people. My girlfriend’s experience was completely different, and most of the community members I know went through much tougher times.

On the Importance of Finding Your Tribe

Even though my personal coming out experience was positive, I still didn’t feel comfortable being truly myself until I came to Bota Bota. We spend a third of our waking life at work, so we might as well not have to hide who we are. I also came from a much more traditional environment.

As soon as I arrived, I was welcomed with open arms by my colleagues, and I was pleasantly surprised to discover that half the management team was made up of LGBTQ+ members and that most directors were female. The rest of the crew and the registered massage therapists who practice at the spa a very beautiful gender, sexual orientation and ethnic tapestry.

This diversity seems to have spawned organically over the years and reflects our captain’s open-mindedness and the safe space that was created over the years. By chance or as a sign of the openness that would soon reign on board, the naval engineer who was a great part of the spa’s genesis is also a trans woman.

On the Philosophy of Authenticity

This is why I have come to believe that June should not be expressed only though well-crafted marketing efforts wrapped in a neat rainbow flag. Pride must be at the heart of our daily lives, in each of our actions. Diversity and openness need to be experienced year-round, not just in June.

As a spa and a member of the wellness industry, we are also well placed to do our part in creating a more inclusive society. Often, we are also witnesses to several social changes, take for example the growing place of wellness in straight men’s lives, or the greater acceptance of gender diversity in our locker rooms.

We are also fortunate to live in an urban environment and a more welcoming culture than almost anywhere in the world. We must however not forget that that this freedom is fragile. The current climate our neighbours to the South are experiencing and the polarization that is taking hold of most debates remind us that our rights must never be taken for granted. The struggle of the trans community is a good example of the path that remains to be beaten and abortion rights, of the danger that awaits us.

Still, I remain hopeful that the open-mindedness of younger generations will bring us in the right direction and will counterbalance the efforts of those who want to attach the rights of others, either out of self-defence or simple fear of change.

I told you I was a glass-half-full kind of girl. 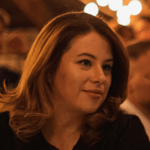