Montreal’s Top 5 Farmers’ Baskets | Bota Bota, spa-sur-l'eau
We use cookies to offer you content, publicities and services tailored to your interests and to compile visit statistics. By continuing to use this website, you agree to our use of cookies unless you have disabled them through your browser. For more information, please see the Terms and Conditions.
I accept 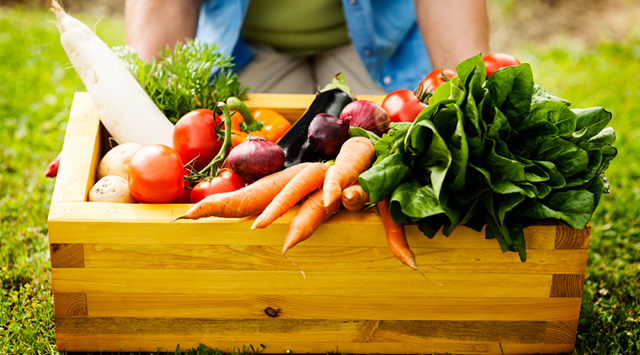 Fresh local foods delivered practically to your door? Yes please. We’ve found five farmers’ basket services that have got Montrealers talking. Get on the bandwagon and make your mealtimes that much more meaningful!

Supporting local farms by signing up for a weekly basket delivery isn’t just the tastiest way to increase the veggie quotient in your diet, it’s also a great way to get involved in your community and encourage alternatives to the big food industry. Montrealers are lucky in that they have an abundance of local farms to choose from, each offering its own twist on Mother Nature’s offerings. Here are five of our favourites:

Lufa Farms
Aside from having the biggest delivery network in the city, Lufa Farms is unique in that its farm is hydroponic and set in the city itself, in a rooftop greenhouse. It’s a great system for water conservation, plus it means they can grow and deliver fresh produce all year round. Lufa also offers a vast array of goods by local producers which you can order week to week, including baked goods by Le Formentier, seasoned salt by Joe Beef, jams and jellies by Gourmet Sauvage, fresh pasta by La Maison du ravioli, and chocolates by Chocolaterie Bonneau – plus there’s even soaps and face creams. You can sign up for deliveries anytime.

Morgan Farm
Contrary to the majority of delivery services, which offer fruit and veggies exclusively, Morgan Farm specializes in compassionately raised organic meats. From beef and veal to Muscovy duck and wild boar, their meats are raised in idyllic circumstances right there in the sunny Eastern Townships. The produce on offer ranges from tomatoes to leeks, kale, Swiss chard, sprouts, eggplant, cantaloupe, watermelon, and more. And don’t forget the baked goods, including a wide selection of gluten-free breads and treats. You’ll find Morgan Farm at various farmers’ markets in the summer, but for personalized orders, sign up here and choose the most convenient drop-off spot.

Les Jardins du Petit Tremble
This farm grows one of the most prodigious selections of organic fruit and veggies available, including organic corn on the cob (a rarity, as corn is among the most GMO’d species in the world), bok choy, artichokes, fennel, watermelon, and ground cherries. The baskets are generous, and in the summer, come in two formats, the largest of which can easily feed a family. Les Jardins du Petit Tremble  also offers all sorts of fun opportunities to help on the spot in Saint-Antoine-sur-Richelieu, if you want to practice your green thumb; how about sowing a few seeds of your own? To catch the summer baskets, sign up here before June 17, otherwise you’ve got until October 21 for the winter baskets.

Ferme Cadet-Roussel
This farm in Mont St-Grégoire isn’t just organic, it’s biodynamic, which means its produce is protected from pests and encouraged to grow to its fullest potential thanks to the lunar cycle, judicious composting, and the rotation of crops in order to keep the soil rich. It’s Mother Nature at her most intuitive, and the results are tasty. At Cadet-Roussel, you’ll find the regular tomatoes, cucumbers, snap peas, lettuces, and leaves in their generous baskets, plus a panoply of more unexpected goodies: black radishes, celery root, endives, tomatillos, and many varieties of squash. There’s also a store at the farm itself. Sign up for the summer baskets here before June 24.

Ferme du Zephyr
This certified organic farm is located on the island of Montreal, in Senneville, just north of the beautiful Morgan Arboretum. Ferme du Zephyr began by distributed produce exclusively to restaurants, but in the last few years has been selling more widely to laymen like you and me in the city’s west end. Its refined offerings include heirloom tomatoes of all imaginable shapes and colours (black, purple, orange, yellow – even striped!), as well as heirloom pepper and squash, fingerling potatoes, and golden beets. Restaurants praise the arugula, considered by many to be the best in Montreal. Zephyr only offers 80 spots a year – so plan ahead to sign up before March 1, 2015! In the meantime, find them at these farmers’ markets around town.