Taming the Saint Lawrence | Bota Bota, spa-sur-l'eau
We use cookies to offer you content, publicities and services tailored to your interests and to compile visit statistics. By continuing to use this website, you agree to our use of cookies unless you have disabled them through your browser. For more information, please see the Terms and Conditions.
I accept 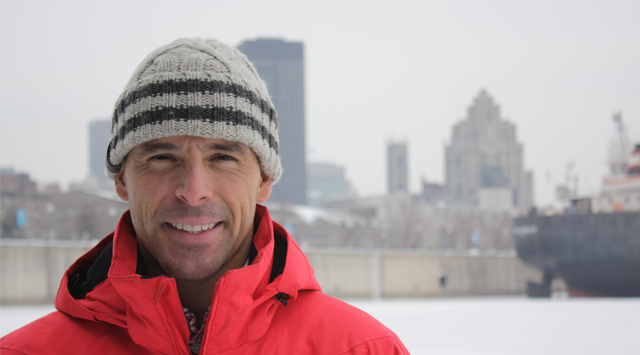 Now a typical Quebec sport, ice canoeing once provided an important link across the Saint Lawrence for both people and goods. Modernized transport across the river eventually transformed an economic necessity into a sport, but the technique remains the same: canoes are pushed on the ice and jumped into when free water is encountered. Paddling between dangerous blocks of ice, the canoeists jump back out again to push where the water has frozen over.

Well rooted in local tradition, the sport sparked the interest of Simon Lebrun of Héritage Maritime Canada, a non-profit organization dedicated to promoting our maritime heritage. Seeking to familiarize Montrealers with their river’s history, the organization was looking for a project that would have popular appeal. “When we learned that ice canoeing had once been practiced in Montreal, we decided to revive it,” Simon explains. The Montreal Ice Canoe Challenge was thus born. Now in its third year, the event presents seven races on the Saint Lawrence between Montreal and Rimouski.

The Montreal race, the longest of them all, is infamous with practitioners of this extreme sport, who must cross three or four times the fierce Saint Mary current, making the race particularly risky. Simon notes that even though the event is always safe, spectacular collisions often occur when the canoes enter the swift current.

Everyone is invited to cheer on the canoeists from one of several quays and from the Cité du Havre Park. The nerve centre of the event is located at Clock Tower Quay. This is where commentators describe the race and visitors can enjoy ice sculpture, free snowshoe rental, street food and hot chocolate.

Simon Lebrun is excited about ice canoeing’s growing popularity in the short and long term. He believes that television and the web will play an important role in the sport’s expansion – as was shown by the Quebec City Crashed Ice event – and that new teams will be formed as a result of greater notoriety.

Simon’s enthusiasm is palpable when he describes several ambitious projects planned around the sport. One of these would involve inviting all the countries that had a pavilion at Expo 67 to sponsor a team for a special race to commemorate the 40th anniversary of Montreal’s international exhibition in 2017. The French, Russians and Americans already participate in the event, so the dream could very well come true. Simon also hopes to see a linear ice rally between e.g. Montreal and Sorel, in addition to the traditional circuit. Crowds from communities all along the river could gather to support their favourite team.

Join Simon Lebrun, members of his team and all the athletes participating in the Ice Canoe Challenge at the Clock Tower Quay on February 21 starting at 11 a.m.

For more information and the complete schedule, visit deficanotaglace.ca