Already 5 years afloat! | Bota Bota, spa-sur-l'eau
We use cookies to offer you content, publicities and services tailored to your interests and to compile visit statistics. By continuing to use this website, you agree to our use of cookies unless you have disabled them through your browser. For more information, please see the Terms and Conditions.
I accept 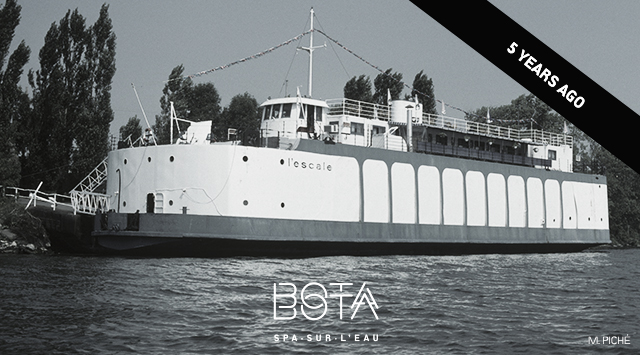 Insights from a longtime employee

When Francis Flahault first paid a visit to Bota Bota four years ago, it was simply to have a quick look around. But he saw a “Hiring” sign and tried his luck. Smart move. After several years as reception agent, he has recently been promoted to the position of Hospitality Supervisor. As Bota Bota celebrates its fifth anniversary, who better to share some insights with us than Francis?

For starters, as you can imagine, if Francis is still on the spa’s payroll, it’s because he is especially fond of the place. “My favourite part of my job is interacting with our clients,” he confides. He says he derives tremendous satisfaction in seeing people entering the establishment visibly stressed and leaving it with a contented smile. “It’s tremendously rewarding,” he adds.

Naturally, the premises have changed since he came on board. The Émonds are always looking to improve the spa and to add new facilities, he says. The most important development has clearly been the Bota Bota Gardens, which were inaugurated this past May.

According to Francis, this new section has met with an enthusiastic reception from clients, who came in record numbers this summer (in fact, Bota Bota was at times fully booked) and who have sung its praises.

As for the clientele, it does not seem to have changed all that much over the years. It is mostly comprised of Montrealers, with a fair share of tourists as well (who sometimes need to be reminded that a bathing suit is mandatory!). While the clientele spans the age spectrum, the spa generally attracts a slightly younger crowd in the evening, as a result of the special rates on the water circuits.

Francis reveals that the Bota Bota crew are on a mission to make the spa a veritable sanctuary for city dwellers, and wish for hydrotherapy to evolve into a lifestyle habit of Montrealers and thus become an integral part of the city’s cultural fabric.

What does the future hold in store? Following the addition of a barge to the principal boat, much thought is going into how to optimize its use for the well-being of patrons. Francis feels that because today’s spa-goers are more informed than ever, there is a need to always offer them more. This is why Bota Bota is always striving to expand and fine-tune its services.

Where will Bota Bota be five years hence, at its tenth anniversary? Hard to say. Till then, however, come on board for a visit!