Our Signature Massage: letting go in style | Bota Bota, spa-sur-l'eau
We use cookies to offer you content, publicities and services tailored to your interests and to compile visit statistics. By continuing to use this website, you agree to our use of cookies unless you have disabled them through your browser. For more information, please see the Terms and Conditions.
I accept 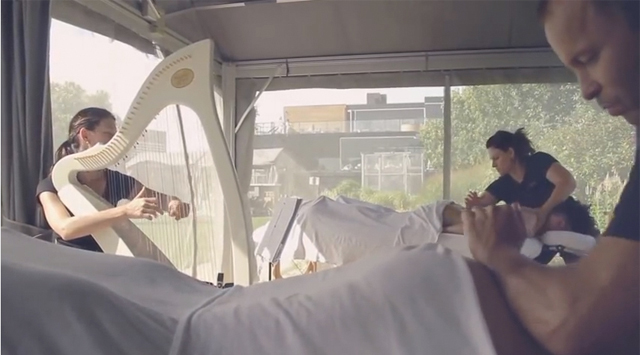 “Music makes the massage experience complete,” says Annabelle Renzo. “And it allows the client to let go and relax more profoundly.” Massage therapists who don’t use music to set the mood are few and far between. It’s just too effective in creating an atmosphere conducive to complete repose. Which is why Annabelle and Bota Bota have decided to take the practice to the next level.

Just imagine getting an outstanding massage inspired by Californian, Swedish and Thai yoga techniques while enjoying nothing less than a private concert featuring a talented harpist. It’s a dream come true!

The idea behind our signature massage has come a long way. It began with the collaboration of three massage therapists and two musicians, and a desire to create completely original musical compositions that would contribute to the massage experience in a unique way. The result of their many hours of work is original indeed.

Virtually all 37 musical works played during our massage have been specifically composed to perfectly complement the therapist’s actions and massage choreography. The only exceptions are those that the harpist improvises on the spot while accompanied by a soundtrack carefully produced and edited with the invaluable help of Studio Plasma’s Vincent Cardinal.

Those who choose to benefit from Annabelle’s services will enjoy a musical style that reflects a highly varied career of symphonic concerts and jazz performances, which includes being accompanist for Kanye West. With her musical assistant, Annabelle creates an atmosphere “where music is profound and minimalist, as well as modern and rhythmic, while building on lounge, Indian and improvised tempos” and where the harp is usually the primary focus. “For thousands of years,” says Annabelle, “the harp has been played for the therapeutic effects of its deep resonance, which fosters a blissful state of abandonment.”

In addition to the harp and musical accompaniment, other sounds are used in the soundtrack prepared by Cardinal. Annabelle’s gestures are punctuated by drops of water falling inside a boat, by a Tibetan singing bowl that acts on the solar plexus, and by the sound of footsteps in snow that accompany the choreography developed specifically for massaging the gluteal muscles.

If you’re hankering for an experience that’s as unique as it is relaxing, our signature massage in just the ticket. Although it wasn’t created to deal with specific pains, it can nevertheless relieve a wide range of physical stresses. Furthermore, where else will you enjoy a choreographed massage accompanied by original music composed by an internationally renowned harpist? Our massage isn’t just about vibroacoustic therapy – it’s also about taking your soul for a relaxing journey you’ll never forget.

There’s a rumour going around about another special project in the works. Let’s hope it’s as remarkable as this one!