Ancient Baths: Ancestors of the Modern Spa | Bota Bota, spa-sur-l'eau
We use cookies to offer you content, publicities and services tailored to your interests and to compile visit statistics. By continuing to use this website, you agree to our use of cookies unless you have disabled them through your browser. For more information, please see the Terms and Conditions.
I accept 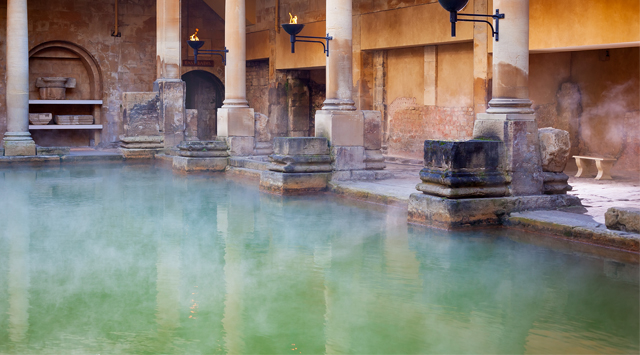 When it comes to spas, most people tend to immediately associate them with Finland, Norway and Sweden. Hardly surprising, as spas have been a solid tradition in the Nordic countries for a couple of millennia. Yet during this same timeline, farther south, in the Mediterranean basin, Greco-Roman societies were also enjoying the benefits of hydrotherapy. They did this at the public baths.

Although the Greeks were the first to establish such facilities, public baths played a more prominent role under the Romans. From the moment they were first built, around the 1st or 2nd century A.D., the Roman baths were popular with citizens from all social strata, both men and women, adults and children, free persons and slaves. Romans visited the baths daily, not only to perform their ablutions and care for their bodies, but to socialize as well. Indeed, it is said that the baths of the day were the centrepiece of social life—the place to meet people. But that said, and beyond matters of personal hygiene, the Romans were fully aware of the invigorating power of these establishments, and also knew of the therapeutic benefits that the alternating use of hot and cold could procure.

If proof were needed, just consider that the Roman baths had already thought of the water circuit! During a visit to the baths, Romans would move from one room to another, just as Bota Bota patrons do today. Though there was no set order or time limit in which they had to do this, a ritual gradually emerged and became fairly ingrained in popular habits, to the point of influencing the architecture of public baths over the years.

The Romans usually began their routine with a spot of exercise in the palestra (wrestling, gymnastics, ball games), before working up a good sweat in the laconicum (steam bath) or the sudatorium (forerunner of the sauna). They then alternated between the caldarium (room with hot plunge baths), frigidarium (cold room) and tepidarium (room with warm baths). Some might spend a moment or two enjoying a massage in the unctuarium, and perhaps even read a bit in the library (which some baths had) before leaving. This circuit may seem familiar to those readers who have already visited Bota Bota…

The Roman baths were technologically sophisticated. They got their water supply from the aqueduct network. The water was heated (to about 50–55°C) by a series of underground ovens. The resulting hot air provided radiant heat beneath the floor and was also distributed via enclosed terracotta wall flues that opened out into the rooms.

Somewhere along the thread of history, the prominent role the baths played in the daily lives of men and women was revealed in a most eloquent manner. Indeed, around the time of the Roman conquest, Caesar used universal access to the public baths as a means to bring together Romans and Gauls, in the hope that this would contribute to the Romanization of Gaul. Incredible, but true! So important were the baths in the lives of his countrymen that the famous emperor was able to use these facilities for his political ends.

We can thus conclude that spas are hardly a fad. Quite the contrary: they are the legacy of a tradition harking back to Antiquity! And in that same vein, wouldn’t it be a good idea to continue the tradition with a visit to the spa?