The Bittersweet Truth About Chocolate | Bota Bota, spa-sur-l'eau
We use cookies to offer you content, publicities and services tailored to your interests and to compile visit statistics. By continuing to use this website, you agree to our use of cookies unless you have disabled them through your browser. For more information, please see the Terms and Conditions.
I accept

The Bittersweet Truth About Chocolate 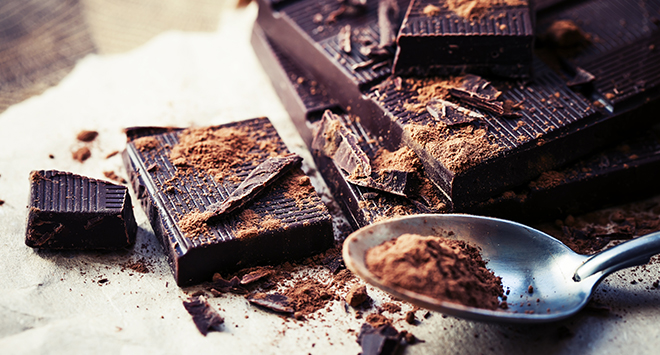 In this day and age when diets and food trends are a popular obsession, small wonder chocolate is on everyone’s lips. Its detractors denounce its ubiquity, while its aficionados sing its praises. Nutritionists and dietitians, for their part, try to remain above the fray with a more objective approach.

Amid all this fuss, it is difficult to get the lowdown on chocolate. Here is a balanced overview of the benefits and drawbacks scientific researchers attribute to chocolate, specifically dark chocolate.

Reduces stress and wards off depression

Some claim that consuming chocolate stimulates the secretion of natural opiates in the brain, giving rise to a slight euphoria that helps reduce stress and keep depression at bay. In addition, chocolate’s blood-thinning properties help lower blood pressure.

Rich in antioxidants, chocolate appears to stimulate blood circulation, including flow to the brain. Indeed, some researchers for this very reason recommend it for patients suffering from Alzheimer’s or dementia.

Several studies conducted over the years suggest that chocolate may act as an aphrodisiac, particularly among women. The findings are not conclusive, however.

Chocolate contains not only caffeine, but also theobromine, which similarly contributes to alertness. According to researchers, cocoa consumption stimulates the production of neurotransmitters, which influence sleep.

Some time ago it was discovered that chocolate diminishes bone density, particularly among women. Moreover, the effect is directly proportional to one’s chocolate intake, making a good case for moderate consumption.

Since chocolate is effective against fatigue, it comes as no surprise that it can lead to sleep disorders. Besides promoting alertness, caffeine and theobromine stimulate the muscles—hardly helpful when you’re trying to catch a few z’s.

Compulsive chocoholics are apparently on a quest for a narcotic buzz. In truth, this narcotic effect is the aforementioned sense of euphoria. Neurologically speaking, chocolate works in a manner similar to serotonin, but the “high” is short-lived, making “coming back down” difficult. The potential result: crankiness! Too much of which may even trigger a migraine.

As a closing thought, it bears noting that the popularity of chocolate has spanned not only centuries, but cultures. Originating in Central America and South America, chocolate went on to seduce Europeans, who then became its master confectioners. Chocolate has brought delight to so many people, so why deny ourselves the pleasure of consuming it? Provided it be done in moderation, naturally. Although for Easter, you could be forgiven for spoiling yourself a bit!