Ice Canoeing: Quebec’s past comes alive | Bota Bota, spa-sur-l'eau
We use cookies to offer you content, publicities and services tailored to your interests and to compile visit statistics. By continuing to use this website, you agree to our use of cookies unless you have disabled them through your browser. For more information, please see the Terms and Conditions.
I accept 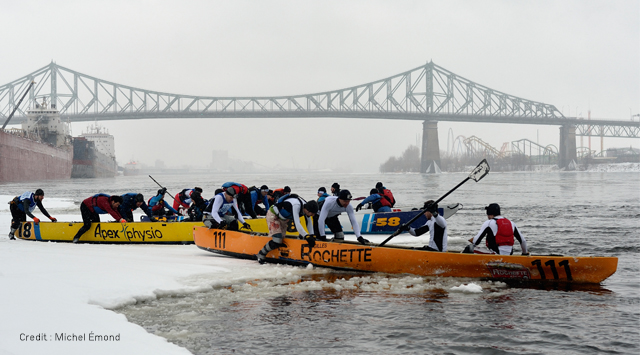 In the old days, ice canoeing was more a necessity than a sport. Before the 1860s, it was sometimes the only way of getting across the Saint Lawrence River in winter. When tides and the spring thaw made ice bridges impossible, there was really no alternative to ice canoes for making the tricky crossing. The technique was employed by the aboriginal peoples, who had long been using canoes before the arrival of the Europeans.

Nineteenth-century canoeists were hired by individuals and businesses to transport goods, medicine, prisoners and passengers across the river, especially around Quebec City. Their crossings involved pushing the canoe on the frozen surface – hopefully without falling – and paddling in the water while avoiding dangerous floating ice. Out of this very practical mode of transport grew informal races, with the first organized race being held in 1894.

The winter crossing in canoes became obsolete with the completion of the Victoria Bridge in 1859. However, canoeing retained its allure as a traditional sport, and ice canoeing became an official activity of the Quebec Winter Carnival in 1955.

Over the past 20 years, races were organized in other parts of Quebec – Gatineau, Montreal, Trois-Rivières, Chicoutimi, L’Isle-aux-Coudres – and in Ontario, at Windsor and Toronto. In 1984, with the founding of the Association des Coureurs en Canot à Glace du Québec (ACCGC), racers adopted official rules and began to organize competitions all over Quebec.Today, with ice canoeing gradually gaining in popularity at home and even abroad, the future looks good.

The Bota Bota Montreal Ice Canoe Challenge will be held on February 21 in the Old Port. Join us at the Clock Tower Quay at 11 a.m. to cheer on the athletes.

Have a great race!